About the Sarnia Police Assocation

The Sarnia Police Association is a professional police labour relations organization committed to providing quality support for the approximately 180 members of the Sarnia Police Service, both sworn and civilian and their families.

Association members are also actively engaged in the community by volunteering time with; fundraising events for local charities, service clubs, community associations and youth sports to make Sarnia a better place. As well the Association, as a whole, is committed by sponsoring various levels of teams in hockey, soccer, baseball, football and lacrosse.

The Association's primary objectives have remained the same which are focused on the well-being of our members: 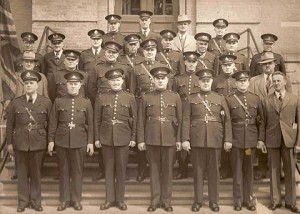 In 1945, the Lambton County Police Association, Chapter No. 16, of the Police Association of Ontario, was formed. This Association consisted of police officers from neighbouring communities of Sarnia, Petrolia, Point Edward, Watford, Alvinston, Courtright, Oil Springs and Sarnia Township, as well as the Ontario Provincial Police, the RCMP and the Polymer Industrial Police.

Since then the Association has grown from a smaller membership of approximately 30 to approximately 110 sworn and 70 civilian members.